24 Hours: New Law on Advertising at I&F McCorner; SUPERSTUDIO wins contest for visual identity of Kneževa Palača in Zadar; The One Club to take over Art Directors Club… 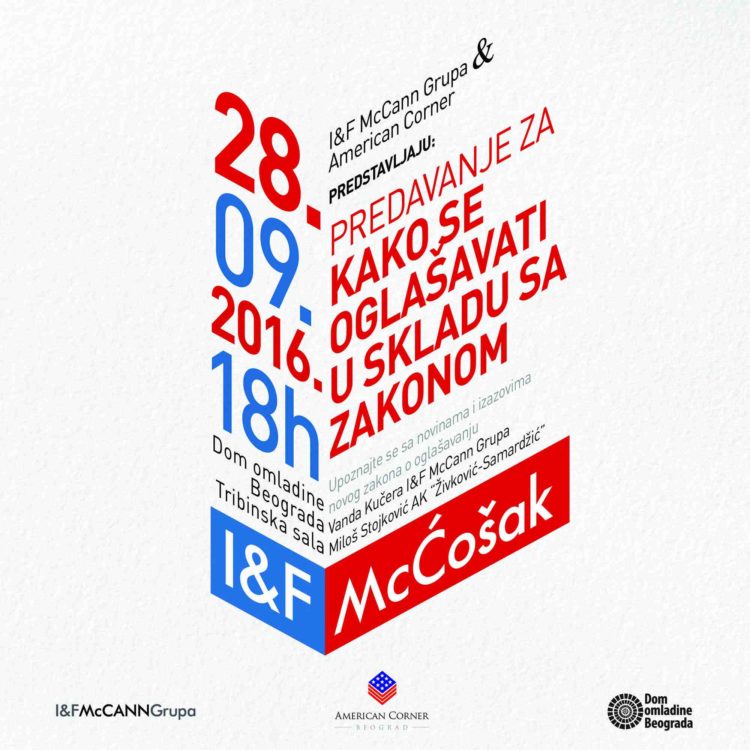 I&F MCCORNER: LECTURE ON THE NEW LAW ON ADVERTISING IN SERBIA

As part of the new autumn season of lectures, I&F McCorner will presents the new Law on Advertising, which is in force in Serbia since May this year. The lecture will be held in the Belgrade Youth Centre on Wednesday, 28 September, from 18 to 20 hours, and speakers will be Vanda Kučera (Corporate Affairs Director at I&F McCann Grupa) and Miloš Stojković (from the attorney’s office Živković-Samardžić).

New Advertising Law came into force after the reform in the field of media legislation. When it comes to novelties, Vanda said that the new law is significantly harmonized with European regulations, and regulates internet advertising, introduces the possibility of self-regulation and co-regulation, and provides a legal framework that allows special care of children and minors, at least when it comes to the advertising industry. “For us from the I&F McCann Grupa work on improving the business environment, the legal framework and standards is of great importance, because we believe that the regulation of business in our industry provides conditions for the development of the whole field of advertising, and all that do business in this segment of the market,” explained Vanda.

I&F McCorner is organized every last Wednesday of the month by the American Corner in Belgrade and the I&F McCann Grupa, in order to contribute to a better understanding of the activities and the transfer of knowledge and skills necessary for the modern world of communications.

Lectures within the I&F McCorner are free, but number of seats is limited. Anyone interested can apply via e-mail at: beograd@americancorners.rs

RESULTS OF THE CONTEST FOR THE DESIGN OF VISUAL IDENTITY, SIGNALING AND INSTALLATIONS OF KNEŽEVA PALAČA IN ZADAR

The jury of the competition for the design of visual identity, signaling and installations of Kneževa Palača in Zadar in July chose five teams to work on proposals. At the second session of the jury, held on 17 September 2016, members reviewed four submitted solutions and unanimously decided on the awards.

To view all the works visit this link.

THE ONE CLUB TO ACQUIRE, MERGE WITH THE ART DIRECTORS CLUB

The board of directors of The One Club voted to acquire and absorb The Art Directors Club, which will cease to exist in its current form moving forward. It is unclear at this time whether the ADC name will remain and how this move will affect the ADC’s Annual Awards show, AgencySpy reports.

The merger came about in response to financial struggles at ADC, which had been involved in discussions regarding a potential sale for several weeks. Approximately six staff members will join The One Club, and the ADC will vacate its current space by November 1.

Facebook has announced a several measurement tie-ups with third-parties, including: MarketShare; Nielsen; Oracle and Visual IQ, in a bid to show advertisers that it is not ‘grading its own homework’ when it comes to helping them evaluate the ROI on spend with the network.

The list includes: Nielsen Catalina Solutions which will now offer FMCG advertisers an option to understand the impact of Facebook and Instagram on in-store sales; Oracle Data Cloud Partner Lift API that makes it easier for FMCG marketers to measure campaign performance; Atlas integration with Visual IQ and MarketShare that enables marketers to devise multi-touch attribution (MTA) methodologies integrating data with Facebook’s Atlas; View-through Measurement with Mobile Measurement Partners that will enable mobile app advertisers to assign credit to ads that people viewed but never clicked on (view-through), if that person eventually downloaded their app; Marketing Mix Modeling Reporting Integration which makes it easier for marketers to bring Facebook, Instagram and Audience Network campaign information into their MMM modeling by building direct integrations with partners such as Nielsen, Analytics Partners and Marketshare.

Viacom’s interim chief executive Tom Dooley has stepped down, with a source close to the situation informing Reuters that the company will look both internally and externally for a replacement.

The media giant, which owns the likes of MTV, Comedy Central and Nickelodeon has confirmed that Dooley will be leaving in November. His departure follows on from a high-profile power struggle between controlling shareholders Sumner Redstone, the firm’s board and former chief executive Philippe Dauman who exited the company under a $72m payoff.

Longtime senior executive Dooley was brought in to replace Dauman just last month but it has been claimed he didn’t want to stay in the temporary position. Reuters reports that internally chief financial officer Wade Davis and Viacom’s head of international business have been rumored as potential replacement candidates.

Google announced the release of Google Allo on iOS and Android. The smart messaging app allows users to chat with others in one-on-one and group chats.

As users send text, pictures, videos and emoji in Google Allo, the app’s Smart Reply feature will suggest responses users can send based on the topic of the conversation. For instance, if a user receives a picture of a puppy, one Smart Reply suggestion may be, “Super cute!”

Google said the Smart Reply feature will become better over time as it adjusts to users’ typing styles.