Virtual Tesla – Present of Direct Media for 15 years of operation 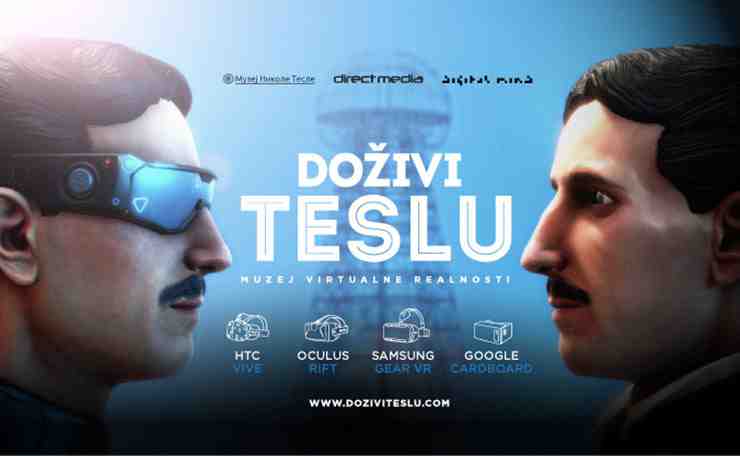 Within the innovated exhibition at the Museum of Nikola Tesla, visitors will be greeted by the great scientist himself, in the first virtual reality setting in the world dedicated to Tesla. Nikola Tesla in four stages of life, from youth to old age, will come to life from the 8th of July in the unique exhibition called Experience Tesla, donated to the Museum by Direct Media for the Tesla’s jubilee and fifteen years of Museum’s successful operation.

“With the VR exhibition, as the latest segment of the new setting in the Nikola Tesla Museum, we keep pace with the global trends in museology. The new exhibition reflects the spirit of time in which Nikola Tesla lived and worked, and through its virtual segment we want to offer visitors a modern and extremely direct interaction with Tesla’s legacy and doctrine, and at the same time we make it more available for his admirers around the world” said Branimir Jovanović, director of the Museum of Nikola Tesla.

By placing VR headsets on their head – similar to a helmet – visitors to the museum will be able to immerse themselves in the virtual world of Nikola Tesla and through five stories hear from the scientist himself about his achievements, find out more about his relationship with Edison, why he never married and assist him in his experiments.

“Tesla had devoted his entire life to innovation, wishing that his patents would benefit humanity. Based on this principle, and believing that modern technologies and companies themselves should have a purpose for the community, by donating the exhibition we wanted to convey the values which Tesla advocated,” said Jovan Stojanović, CEO of Direct Media.

What’s it like to stand next to Tesla in its hydroelectric power plant at Niagara Falls, assist him at Colorado Springs or on platform of the tower on Long Island; what was Tesla’s room like in the famous New Yorker hotel, and what was his vision for the future? These scenes are part of the virtual exhibition which is signed by Vitomir Jevremović from Digital Mind.

“Visitors will have the feeling as if they are really standing next to Tesla. He will address them, and at any point they will see his emotions. Thanks to the extensive museum holdings, original photographs, as well as Tesla’s personal belongings, we have completely reconstructed Tesla’s laboratories, sites of his greatest inventions, and his character. This will be an experience that inspires and awakens the desire for knowledge,” said Vitomir Jevremović, author of the exhibition.

After the world’s largest museums that relatively recently included virtual reality in their settings, this communication trend in the year of Tesla’s jubilee comes to the Nikola Tesla Museum. With this, the museum will become the first cultural institution in the world that has used the technology of virtual reality to revive the character of the great scientist. Museums of virtual reality are a certain future of museology, where the visitor ceases to be a passive participant in the exhibition, and becomes an active part of the story that’s happening all around him, the second they step into the virtual world.

After the opening of the setting Experience Tesla, a smartphone app will be launched, as well as a website with 3D view, so that all those who are unable to visit the museum, including visitors from around the world, will be able to interact with the world’s biggest inventor and learn about his achievements.

You can follow the project at www.doziviteslu.com and social networks:

24 Hours: Hypo Bank with new name and identity as of Monday; Eurocom Worldwide coming to region; IKEA signs with GroupM and Dentsu Aegis...