Babaja was handed the medal in person by President of Croatia for her exceptional contribution to representing design and design profession, and its development in the Republic of Croatia 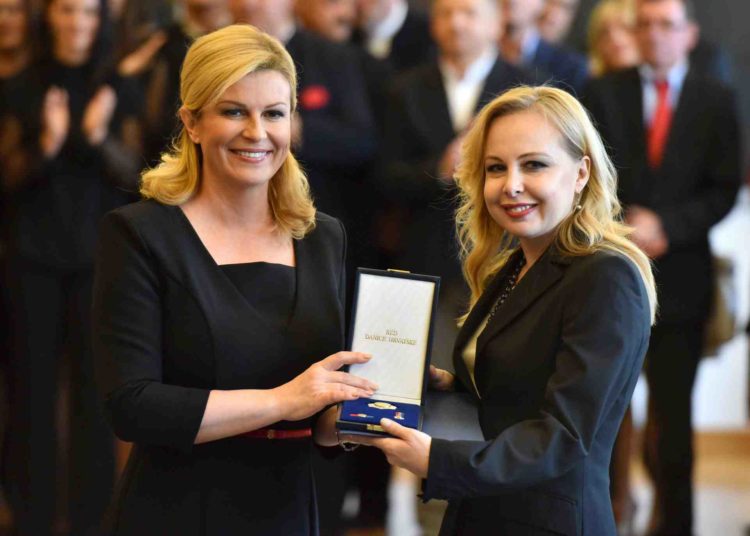 The award winning Croatian designer Iva Babaja, after a number of recognitions and performances of the highest functions at the international level, has finally received the recognition for her committed work in her homeland. It came in the form of an award handed to her personally by the President of the Republic of Croatia, Kolinda Grabar Kitarović.

Ivana was honored with the Order of Danica of Croatia with the image of Marko Marulić for outstanding achievements in the field of culture, and her extraordinary contribution to the representation of design and design profession and its promotion in the Republic of Croatia.

The award came just as Iva finished her mandate as the head of the ico-D, global association of design, which she chaired as the first woman in its over 50 years-long history, but also the first person to head a global body in the field of culture in the history of the independent Republic of Croatia.

What this designer from Zagreb achieved is tantamount to some globally recognized recognition. Having been the vice president and chief secretary of the Ico-D from 2007, in 2013 Iva Babaja was elected President of this global association with whopping 96 percent of the votes from 70 countries. In order to understand the magnitude of this achievement, it is enough to say that Ico-D represents about 200 organizations from 70 countries and that in her capacity as President she has been a guest of ministers of culture, prime ministers and even the presidents of many countries.

“At the time I became a member of the Ico-D organization, it was called ‘Icograda‘. It presented graphic design, ie visual communications. At the time of the crisis that took place in 2012, I realized that we are a dinosaur that will die out if it doesn’t evolve along with time, and that the world of design has changed completely over the course of ten years. I completely changed the strategic orientation and made it more inclusive. Ico-D got a new name and strategy, showing that design is a multidisciplinary activity, making it the central global authority in design, and culminating in the recent World Design Summit in Montreal. Behind me is a lot of work and sacrifices, but now I have to admit that I feel a certain easiness, because it means a lot to be recognized in the country you are coming from, for which I am extremely happy and grateful,” Babaja said.

After an intensive ten-year period at the international level, Iva turned a new page and as a specialist in the field of design management and branding, with a 20-year career as a designer and creative director, she decided to take advantage of this unique combination to start her own business. Together with her longtime associate Tomislava Cigić, Iva Babaja launched the company Babaja Branding & Design Consultancy d.o.o. which not only offers design services to its customers, but also a systematic brand consultation and strategy. Their work has been recognized by numerous domestic and foreign clients with whom they successfully cooperate.

Sabina Suljović: We live and work with the desire that all our shoppers, and us in Konzum, have a Good Day, Every Day!