2017 was a year of ‘purpose’ in which creativity met tech, and emotion drove film-led works 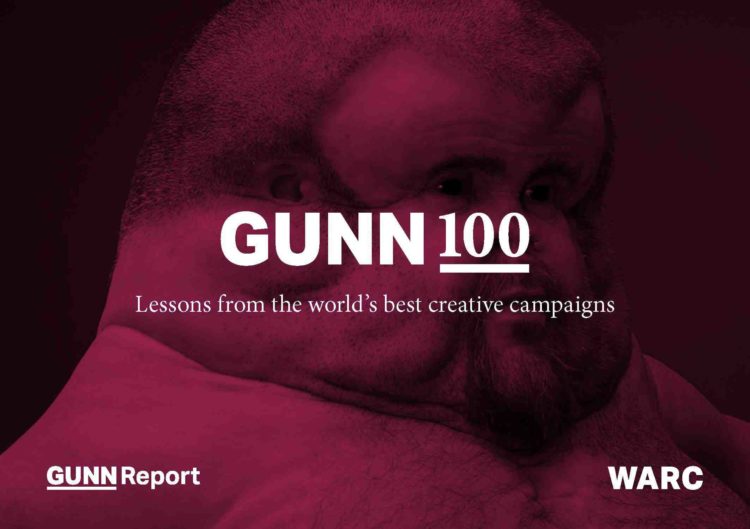 Following an analysis of the recently published Gunn 100, a ranking of award-winning campaigns based on their creative excellence in more than 40 of the world’s top advertising shows, three global creative directors – Susan Credle, Tham Khai Meng and Mark Tutsell – take a closer look at each of the themes to provide learnings from creative successes.

A year of ‘purpose’: Purpose does not have to mean saving the world

Purpose-driven marketing dominates the Gunn 100 but is notable for the number of brands (as opposed to charities or not for-profit organisations) using social or environmental causes in their advertising.

Summarising the role of ‘Purpose’ amongst this year’s top ranking campaigns, Susan Credle, Global Chief Creative Officer, FCB, says: “The best creators are focusing on big ideas and instead of asking “what’s next?” they’re asking “what’s human?” This question creates more purpose-driven work, which rises above the rest.

“But purpose-driven work doesn’t have to solve a world problem to be declared ‘purpose-driven’. The work needs simply to be meaningful in people’s lives.”

Whilst the idea is always at the core of creative marketing, more frequently developing technology is allowing for greater innovation in bringing ideas to life by embedding a powerful sales message inside a wonderful experience.

Tham Khai Meng, Co-Chairman and Worldwide Chief Creative Officer, Ogilvy & Mather commented: “As advertisers we will become purveyors of alternative realities and experiences, but they have to be experiences people genuinely want.

“It all comes down to great ideas. Those wonderful, elusive pieces of magic called ideas lie at the heart of all great advertising. In the digital age it still holds true. Special effects will never compensate for the lack of an idea, but when combined with a great idea the result can be breath-taking.”

A recurring theme in Gunn 100 campaigns is the combination of high production values and technology to stimulate emotional engagement. Ground-breaking technology is delivering breakthroughs for modern neuroscience reinforcing emotion’s role in brand communications.

Taking a look at the game-changing collection of campaigns within the Gunn 100, Mark Tutssel, Chairman & Chief Creative Officer of Leo Burnett Worldwide, says: “It’s reassuring to see the Film work in this year’s collection is bound by a common thread: Pure emotion.

“Emotion is at the heart of storytelling, and there’s still no better storytelling method than film. With the proliferation of screens of all sizes filling our lives, it’s never been a better time to be working in this inspiring medium.”

A shift from mass to precise media: Tailored creative is on the rise – but the role of creativity remains the same

As the industry looks ahead to innovation opportunities and priorities, there is a widespread concern that creativity is being lost as the focus of companies shift from mass to precise media, which requires a different approach to planning and creating work.

Sharing his thoughts on this challenge, Andrew Robertson, President and CEO of BBDO Worldwide, says: “The fundamental approach to creativity doesn’t change but addressable media will become the norm rather than the exception. We’re going to be creating specific tailored messaging – but at scale – for audience segments based on their behaviours, interests and previous transactions.

“We’re talking about millions, tens of millions, hundreds of millions of people that we’ll be addressing this way. And that requires a fundamentally different approach to planning and creating work. It’s all in the plan and all in the execution.”

The report in full together with the entire Gunn 100 rankings is available by subscription on www.warc.com/gunnreport.