Audio stocks are always a kind of competition, but I personally try to explain to people that there is no music from an audio stock that can replace well-written music for a specific image or ad

in Topic of the week
3 min read 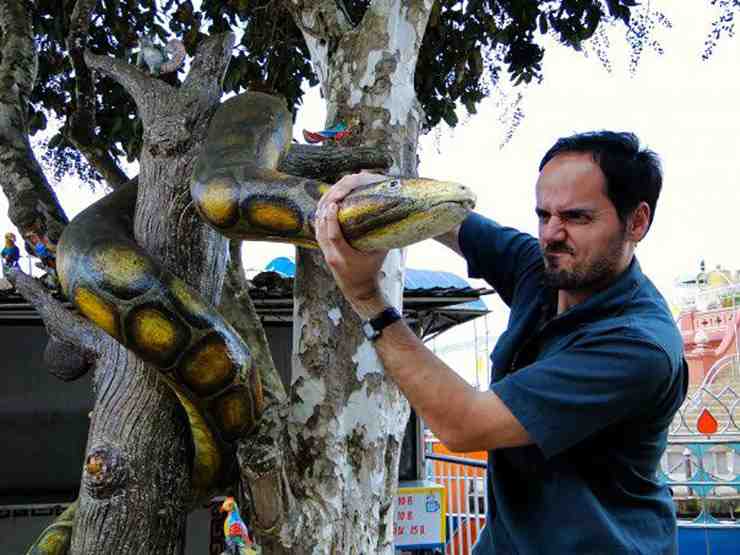 Dubravko Robić was born in 1976 in Zagreb. After high school, he believed that he would work in graphic design. But when he graduated from university, he realized that his colleagues were far more talented in their artistic expression than he was. Fortunately, at the same time his musical talent came to the fore, and he has been composing and performing music to this day (and intends to do so as long as his fingers and brain still serve him). He’s happy that his profession is something that is vitally important – music. In addition to music, he is addicted to travel and dark chocolate.

MEDIA MARKETING: How much is music appreciated in advertising today?

DUBRAVKO ROBIĆ: It depends on who is assessing it – the client or the viewer, ha ha.

The significance of the role of music in advertising depends on the form, not only on the content of an ad. Some spots are beautifully recorded, directed and written – but often accompanied with voice, narration, from the first to the last frame, so the music has to function as background atmosphere. In other words, often the music can’t show its whole glory. So from the standpoint of the viewer, music is often not perceived (or appreciated) as much as it should be. It’s not easy to write a good thirty seconds of music with a head and a tail, and have it invoke a specific emotion in the viewer.

If we talk about how much music is “appreciated” by the client – it depends on the client and the budget. Audio stocks are always a kind of competition, but I personally try to explain to people that there is no music from an audio stock that can replace well-written music for a specific image or ad.

MEDIA MARKETING: From where do you draw your inspiration? From clients’ briefs, the ideas of the creative director, or is it all a matter of talent and experience?

DUBRAVKO ROBIĆ: Inspiration is initially a matter of talent and experience, but the final musical piece is still controlled by those who commission it, be it a client or a marketing agency (creative director). Let’s not forget that music in marketing is in the service of the media (in this case, a commercial spot). But I must add that I sometimes regret that, lately, there are often cases where commissioned music has to emulate the current mundane hits, and that this is frequently insisted on. Because of this, those terms in your question (talent, inspiration), are actually limited, and the composer is reduced to the role of “technician” rather than creative. But no matter – even after fifteen years in this business, the pleasure that I feel after a well composed piece is invaluable and it can always be felt (heard) in the final product. So, more freedom – better results. :-)

MEDIA MARKETING: I know it’s hard to answer, but still, is there a work you are most proud of?

DUBRAVKO ROBIĆ: As I compose music for various forms – movies, TV shows, commercials, pop songs – I have favorites in all categories. There are a lot of works, but I could single out the movie by Petar Oreškovic, Otpadnici (Waste Youth), which almost doesn’t contain a single spoken sentence, but is largely carried by the music (the film was noticed at various festivals that focus on music in the film), and the series Crno bijeli svijet (Black and White World, directed by Goran Kulenović and Igor Mirković), but since we’re talking about music in advertising, I can say that I would single out all the videos for which viewers asked “and what is that music in the commercial?”. Really – for those spots I tell myself immodestly: I arranged that so well, the ad has gained in quality.

You asked me for links to some of my work, so these are the pieces that are somewhat related to your third question:

– award for best music at the Judgment Day festival

Valerija Prevolšek: Women will rule the Balkans, and I can't wait for that to happen!