Eric Monnet: Get out. Look around you. Feed yourself on stories. On other people. On travels. On exhibits. Get outside of your comfort zone. 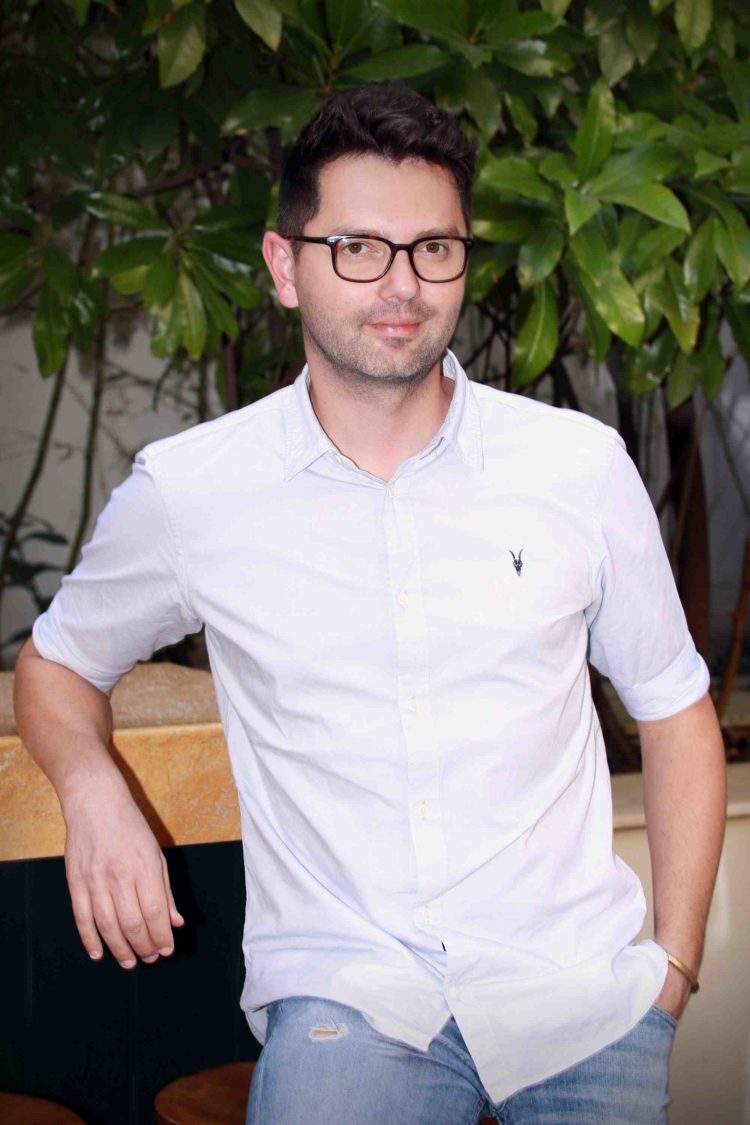 Top creative directors of McCann’s agency network from Central and Eastern Europe gathered in Belgrade to exchange experiences on the best and most effective campaigns, continue working on creating campaigns for clients, and apply the world’s best experiences in everyday creative work. It was another opportunity for local McCann agencies to contribute to promoting regional creativity in the world.

The meeting was also attended by Eric Monnet, Director of Creative Excellence and VP, Network Creative Manager at McCann Worldgroup from New York. Below are his impressions from the meeting, and comments about the creativity of this region which he shared during his stay in Belgrade.

McCann is known for creating efficient and award-winning campaigns. What is the recipe for this?

I wish there was a recipe! It would make our lives so much easier! There are several reasons for the success we’ve been having over the past years.

First and foremost, we’re not chasing awards. Awards are a by-product of creating magical, entertaining, solid and real work. We’re spending our energy on solving our client’s biggest problems, and usually it does create a fair amount of success in the award shows circuit eventually. But again, it’s not the goal. We produced several campaigns that we are extremely proud of although they didn’t win 10 Grand Prix in Cannes.

The second reason, I think, is an indefectible partnership between strategy, account, production and creative. It seems obvious, but it is the reason why we’re being recognized as one of the most effective and creative networks in the world.

Finally, let’s keep in mind that effectiveness doesn’t go without creativity and the other way around. You can have the most effective campaign in the world, but if the creative isn’t great, it won’t win in a show like the Effies. And in Cannes and most of the creative shows, results and effectiveness of the campaign are part of the score of a campaign.

How can brands play a meaningful role in people’s lives?

By being rooted in reality. By making sure you’re staying relevant, regardless of how long and how hard you worked on a new product or a new service. We tend to be so close to what we produce that sometimes we don’t realize how disconnected we might have become in the process. You want to stay connected to the reality of people’s lives.

Are you making a difference in their lives? Are you having an impact on culture? The value created by brands and the advertising industry at large has to ignite something new. A change of awareness, a change of behavior, you name it. Creativity should be like a snowball that keeps growing as people are reacting to it. I think a metric for “meaning” is how much people are using your creation to create more.  In today’s social media age for instance, it’s very easy to have an opinion or react to something.

What makes you proud about the campaign Fearless Girl – its success in competitions or the influence it had in different societies?

Again, although I’m very happy with the four Grand Prix it won in Cannes, this isn’t what makes me the proudest. How many times in a career can you work on a piece of advertising that is so right for its time, that is so perfect that it will outlive all of us? I was lucky enough to see the team at work and to have witnessed the making of this campaign. I couldn’t be prouder of this team, because of their commitment to make it happen, their dedication to the client and the energy they invested in it. In 30 years from now, they’ll be able to take their grandchildren to the statue, and show what they made. This idea makes me extremely happy.

In this campaign, how did you manage to connect two contradictory successes – being both permanent and timely?

It wasn’t originally meant to be permanent. The client had a fund dedicated to companies with strong female representation in their leadership to promote, and that’s what it was about. The original permit for the statue was just for a week, and that’s when the magic happened. It was so relevant, so significant for the people, the country and the world, that it got out of hand. People got organized. A petition was signed. Officials got involved. This statue crystallized the answer that people didn’t know they were waiting for. It took the world by surprise, and its genuineness did the rest.

That’s a very relevant question these days. Awards are a metric. We can criticize them a lot, complain about their relevance, their price, etc. What we do is pop culture. If you get back to that definition, it’s a snapshot of a moment in time. Pop culture isn’t meant to hang on a wall. We consume it, at a certain time, and there’s always something more relevant that comes along and replaces it. And that’s okay. The advertising we’re creating today will be a window on our time for future generations. They’ll know what was important to us. What we cared about, what our struggles were. Fearless Girl will do that job. The Amnesty International “Refugee Flag“, created by Ogilvy New York will do the same. If you win in the AICP awards, your work will even get in New York’s Museum Of Modern Art’s archive – forever!

From your position, where you have a great overview on the whole creative landscape – what makes this part of Europe special?

This region might not have the big budgets from other regions, but other regions don’t have your stories. Central and Eastern Europe has a lot of specific tensions and problems to solve and creativity feeds on specificity. I have seen so many great campaigns coming from this region that are rooted in local culture, based on tensions that are not to be found anywhere else. It’s great that you have learned how to work with that and have managed to approach the lack of budgets as a challenge to be more creative.

Being on the top of a creative network, how important are different experiences you have in the teams from different markets that work together?

Integration at large is always a factor of success. We’re trying to build teams that are the most diverse and gender equal as possible. It’s not just a question of markets but also a question of disciplines and companies working together within Worldgroup. Every time you mix different cultures and get people from various backgrounds to work together, you get an astonishing result.

In our Creative Leadership Community, we meet on a regional level, like now in Belgrade, and have all creative leaders from the region debate about work for a couple of days. We need different points of view coming from various markets with their own background, in order to improve the challenge a campaign and therefore improve it.

People usually say all the ideas are already seen – where to look for inspiration?

I heard that too. It’s not wrong but it’s not right either. This is a very general idea and I would go the other way: I would advise to spend a lot of time on websites that gather great work. The Clios Archive, The One Show Archive, have free access. If you can, get a membership in AdForum or Coloribus, or even the Cannes Archive. Every person working in advertising should be an encyclopedia of former great work. Because by doing so, they would train their brain in seeing similarities in work and therefore start to think differently. And don’t just watch the Grand Prix and Gold winners: spend time watching the work that shortlisted but didn’t win. Create yourself a not-to-do list. It’s always helpful.

In addition, get outside of advertising. Don’t stay put on your chair trying to crack a brief.

Get out. Look around you. Feed yourself on stories. On other people. On travels. On exhibits. Get outside of your comfort zone. Do things out of your routine.

How far is this region from the current trends, in terms of creativity?

If you take a look at Cannes’ results for the region, it looks like Central and Eastern Europe represent around 15% of shortlists and Lions won – this is an estimation, not an official figure. So there’s clearly room for improvement but it’s also not bad at all, when you think about it. Europe at large seems dominated by historically very creative markets such as the UK, Germany, the Nordics, Spain, France… so CEE has a solid share of success.

Also, 14 countries from the region won at least one Lion out of 17 who shortlisted (this includes Italy). That means that by global standards of creativity, a lot of markets from CEE are at a good level – even if the conversion rate from shortlists to metal could be higher, when we compare it to the rest of the world.

Agencies of McCann are the leaders in the countries of this region – how important is the synergy between McCann teams?

This is a very fun group. We just met to discuss about work and there’s definitely a very special spirit here – a cohesion. It doesn’t feel like a working group. It feels like people are hanging out outside of work. As explained before, people are rooting for one another. They’re helping out each other. It is key for us to have this level of synergy to keep moving forward, together as a group. The feeling is similar in other regions of the world and it’s very gratifying to see offices that didn’t perform well creatively before, get onboard and start to step up their games.

What are your impressions about McCann Beograd’s campaigns? CEE Campaigns?

McCann Beograd had an exciting campaign for LAV beer last year. This kind of idea is exactly what we’re trying to develop more and more. It’s smart, it delivers a clear message and it’s done for a big client locally. I’m confident after the meeting we just had in Serbia that the agency has the potential and will create more award-winning campaigns.

Central and Eastern Europe has been a very strong region for McCann over the years. We were Network of the Year several times in a row in Golden Drum, based on amazing campaigns created by Romania, Czech Republic, Hungary, Croatia, Serbia etc.

What is the future of advertising?

Remember the movie Minority Report from 2001, starring Tom Cruise? There was a scene where outdoor ads would be so personalized that they called out Tom Cruise’s character. He then entered a Gap store and was greeted by a hologram asking about his previous purchases.

All trend markers are showing this year that personalized advertising is trend #1 in the years to come.

While technology’s role in advertising will grow more and more in the future, we should also be careful not to look exclusively for technological solutions. Look at Fearless Girl. It’s a simple statue, at the end of the day, and that’s the beauty of it. There was no technological component to the campaign. My point is “traditional” disciplines and media can still be extremely relevant.

The secret link between London Tube and HTV