Belma Hadžiomerović: It’s a great pleasure to be a partner of the Sarajevo Film Festival, which considerably contributes to positive image of our country 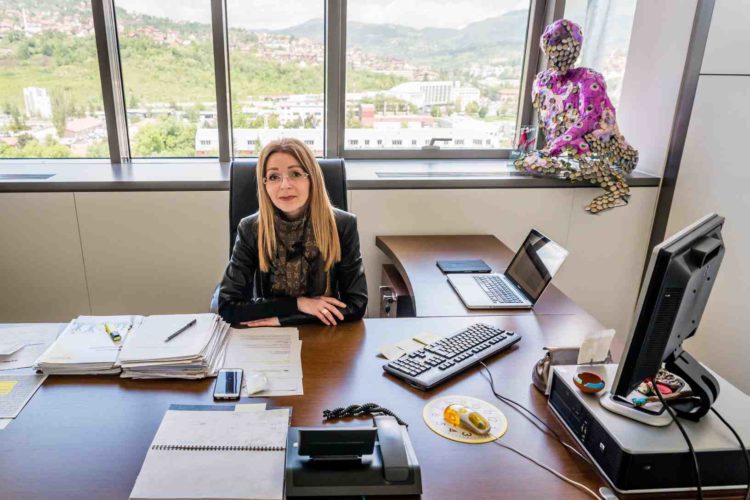 Screening of the film “The Other Side of Hope” on Friday opened the Sarajevo Film Festival – the most significant event of the film industry in the Adriatic region. Over the eight days of the festival, Sarajevo becomes a film metropolis, a meeting place for producers, directors, actors, journalists and many other professionals who are linked to the seventh art. And, of course, the film lovers from the region who fill the festival halls.

Sarajevo Film Festival could not have grown from year to year if there weren’t its loyal sponsors, and a special place holds the Raiffeisen Bank as its main sponsor. The partnership of the largest banking institution in Bosnia and Herzegovina, and the largest event of the film industry lasts for more than 20 years now. We talked about this with Belma Hadžiomerović, Director of Marketing and Corporate Communication & Sustainability Management at Raiffeisen Bank dd BIH. Belma has been in this position at the Bank only slightly shorter than the time during which Raiffeisen Bank and the Sarajevo Film Festival have been partners.

Belma Hadžiomerović: There are a large number of activities supported by Raiffeisen Bank within its sustainability strategy. Although the main focus of the Bank’s socially responsible activities is primarily support for children and persons with special needs, we are also proud of the fact that we support significant projects in the field of culture. In this way, we contribute to those who enrich us and the community in which we work.

In this area, the support of the Sarajevo Film Festival certainly stands out. We have been their partner, and I would say a friend, for more than two decades. I would use this opportunity to also mention our support to the Sarajevo Academy of Fine Arts. Considering that the combination of banking and art is already a common concept in the world, and that during the construction of the headquarters building of Raiffeisen Bank in Sarajevo a space was foreseen for exhibition purposes, the Bank has established cooperation with the Academy which has been successfully ongoing for eight years. Within this project every year, the best students of the Academy have the opportunity to present their works to the public, and the Bank also supports their work with one-time scholarships.

Following the sustainability strategy, the Bank in 2007 established a public competition, which is the result of the Bank’s efforts to systematically respond to a large number of sponsorship and donation queries which we receive on a daily basis. Within this year’s Competition, we supported 60 projects, of which 10 were in the field of culture.

Art&Business: Since the first Sarajevo Film Festival, the Bank has been one of the main sponsors of this huge event for the film industry. What is it that connects the Bank and the Festival?

Belma Hadžiomerović: I am proud to say that Raiffeisen Bank and the Sarajevo Film Festival are connected through exceptionally successful cooperation. We have recognized the significance of this project more than 20 years ago, and have supported it through various sponsorships, and since 2009 we are the Main Sponsor of the Festival. It is our great pleasure to be a partner of such a project that significantly contributes to the positive image of our country. In addition to enjoying great atmosphere, during the festival we try to introduce to our clients new offers of the Bank through various types of promotions.

Art&Business: CEO and Chairman of the Board of the Bank, Mr. Karlheinz Dobnigg, after signing this year’s contract with the Sarajevo Film Festival said that the Festival and the Bank have grown and developed over the years in parallel, that they became leading brands in the BiH market, and that the collaboration has grown into a true friendship. This is a truly rare example in Bosnia and Herzegovina.

Belma Hadžiomerović: During 25 years of business in the BiH market, Raiffeisen Bank has become one of the leading financial institutions with a strong market position, and the Festival has long crossed the borders of this country and became one of the most respected film festivals in the region. We are pleased that this partnership has been on the upward path over the years, and we have continually sought to improve and further consolidate it.

Art&Business: The main stage this year carries the name Raiffeisen Open Air. What will the Bank be doing in this space during the Festival?

Belma Hadžiomerović: The logical sequence of our long-standing cooperation was to name the summer cinema during the Festival as Raiffeisen Open Air, and we are particularly proud of it. In the first night of the Festival, the Bank hosted the screening of the film The Other Side of Hope in this cinema, and on that occasion we prepared special surprises for all visitors. During the festival, there are promotions at the cinema where visitors can get acquainted with the new service – Raiffeisen Viber Banking. The new service is an innovative banking product that allows users to send money to one of their Viber contacts in just a few steps, to receive money on an account in BiH, or to settle their credit card debt at the Bank. Also, this year at the Festival Square there is the Raiffeisen Pavilion, where clients can learn more about this service. Clients, who register at the Pavilion for Viber Banking, are rewarded with a special gift.

Art&Business: How will you communicate this year’s sponsorship of the SFF?

Belma Hadžiomerović: We are actively working on quality communication of the Bank’s support of the Sarajevo Film Festival. We marked the continued collaboration together with our clients and media representatives, enjoying together in the film screening and mingling that was held at the beginning of May. Additionally, each year we organize for our clients a traditional reception where we have the opportunity to mingle with them in a somewhat more relaxed atmosphere and thank them in this way for investing their trust with us.

The public had the opportunity to get acquainted with our activities at this year’s Festival both through print and electronic media, as well as through interviews with CEO and Chairman of the Bank’s Board Mr. Dobnigg.

There is also our unavoidable series of Financial News, within which we strive to cover all the current issues related to the Bank’s business. Before the very beginning of the Festival, we sent a special newsletter to the clients about the Bank’s activities during the SFF. Of course, we also communicate relevant information through our social platforms.

Art&Business: That’s a lot of work for your team. Do you even find the time to watch some of the films?

Belma Hadžiomerović: It is a real pleasure to be in Sarajevo during the Sarajevo Film Festival and to feel all that the Festival offers. Namely, SFF brings a special positive spirit among the visitors, and there’s a different mood in the city. Every year I enjoy this nice festival atmosphere, and in addition to many obligations, I also try to enjoy myself and be a regular visitor at movie screenings.

24 Hours: Publicis and Carat are hiring; POMP Forum: New role of Content marketing; Will fitness trainers get their own Academy Award...