in Topic of the week
6 min read 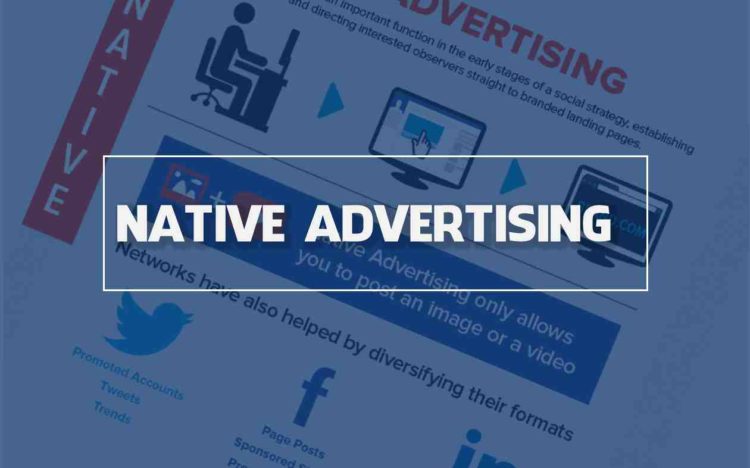 Digital marketing is on the rise, and the creativity of advertising agencies and new technologies will further accelerate the process. Terms like native advertising and content marketing are no longer a mystery for clients, and thanks to that the value of their brands is increasing.

Native advertising is a type of advertising, usually on the internet but also elsewhere, that corresponds to the shape and function of the platform on which it appears. In many cases, it manifests as an article or video production of the advertiser, with the specific intent to promote a product, while the corresponding shape and style is same as that which would otherwise be seen in the work of the editorial staff. The word native refers to the coherence of content with other media content that appears on the same platform.

Native ads correspond to the visual design of the media and the platform, and look like natural and normal content. The biggest social platforms in the world like Facebook, Twitter, Instagram and Tumblr daily use native advertising, and even the famous print publications such as Forbes, Wall Street Journal, New York Times and USA Today began employing these new advertising integrations on desktops and smartphones of users, and these “adverts” correspond to the shape and function of the editorial policy of their media.

“Native advertising is definitely one of the channels of successful advertising, because of the natural binding to the interests and needs of people, which the name suggests. Given that consumers today are exposed to numerous messages, and their attention and consumption of certain media and channels is increasingly selective and shorter, the concept of native advertising gave a good answer to this. Through native, brand message appears at the moment when the consumer is sensitive to the topic we serve, which means there is an interest and need, making the efficiency of communication messages greater,” said Sanja Petek Mujačić, executive director of Bruketa&Žinić OM.

According to Igor Poznić, online media manager at Universal McCann, native is a form of advertising ideal for building brand awareness as well as building reach, and brands that use native advertising greatly increase the opportunities for quality leads. They point out that previous studies have shown that users spend much more time on native content, that it can be visually much more attractive than standard formats, and that users are more likely to share this content on social networks. “In a way, this ‘shareable component’ of native advertising often brings the greatest value. Of course, it’s extremely important that the native content is contextually relevant, and that it ‘naturally’ fits to a digital platform on which it is used,” said Poznić.

According to him, digital native advertising in Croatia is used more and more, especially in the last year, and the most visited digital media in Croatia have formed teams that specialize in the production of native content. Petek Mujačić pointed out that one of the advantages of quality native project is data collection. It allows brands, she claims, to build big data analysis systems through which they can do continuous analysis of daily inputs on consumer behaviour. This data is then aggregated, evaluated and transformed into guidelines for strategies, tactical operations and media buying. She also said that the content created through native inspires and engages users and encourages awareness of the need to purchase and consume a product or a service.

“Of course, it should be remembered that native is only one of the tools of integrated communication and that channel selection and tactics must be based on those channels which are most effective in relation to the set objective. Sometimes it’s native, and sometimes it’s something else. And apart from that, you should take into account the consistent communication of brand’s attributes and key messages across channels,” said Petek Mujačić. World studies have shown that 25 percent of consumers have been focusing more attention on native ads than on standard banners. Also, consumers follow native advertising by 2 percent more than the rest of the contents of the medium and spend the same number of seconds on them as on other media content. As much as 97 percent of media consumers who follow the media via smartphones believe that native ads are effective in achieving the objectives of the brand. It’s important to point out that studies show that native advertising increases buying as much as 18 percent more than traditional banners. Platforms for native advertising are divided into two categories, ie “open” and “closed” platforms.

Closed platforms are formats created by the brands themselves, in order to promote their own content on their websites. Advertisements like those seen on these platforms will not be seen on other platforms because advertising distributed on closed platforms is derived from the platform of the brand. Popular examples are Promoted Tweets on Twitter, Sponsored Stories on Facebook and TrueView Video Ads on YouTube. “Native ad itself is a good format, but it’s very often a format of limited reach and impact on customers and can rarely be the main carrier of the campaign,” believes Petar Pavić. Poznić followed up claiming that native advertising sometimes requires much more engagement both from the client and from the media, and in this sense it’s perhaps more difficult to “sell”. “It is a natural extension of content marketing, in which it is necessary to clearly set objectives and determine focus, and with it comes the right result for the client,” Poznić believes.

Open platforms are defined for the promotion of the brand and the content of the brand across multiple platforms, but for some variations even different ways of placing ads. Unlike closed platforms, this content can occur outside of these web sites on other platforms, and there they are placed by advertisers themselves. In most situations, native advertising is actually a paid opportunity for reaching new customers on pay to play model, where brands pay for the placement of content on the platform beyond their own media. It’s the content that is useful, interesting and very specifically designed for a specific audience.

It’s by no means a traditional ad that directly promotes a company, a product or a service, and the information is usually targeted as valuable information. Although the content is embedded in the medium, it still represents renting someone else’s distribution platform and therefore is a form of advertising, even if it doesn’t promote a product or a service as directly as usual advertising. The user experience is not interrupted with native advertising because these advertising solutions are delivered so as not to interfere with the user’s normal behaviour on the media platform.

Brands want native advertising to look as similar as possible to the content of the medium, and even though the media platforms have the same desires, they must put a “warning” that this is paid content to make sure that everything is 100 percent transparent. “I think that native will still considerably develop and will be increasingly used in the communication plans. Its idea corresponds to present trends in integrated communications in which there is an overlap and a replacement of importance of the role of individual channels, in a time when analytics and metrics have become important and possible in all points of contact between the brand and the consumer,” Petek Mujačić concluded.

Audience shares on its own

However, it’s sometimes hard to sell native ads to clients, or convince them that the content marketing is best for them. “In both cases it’s about building the image through a useful, interesting content indirectly related to the brand, and not the direct promotion of the company or product. The second reason why it’s more difficult to sell to clients is that the results can be seen only after long-term, but continuous activities. Native marketing is probably in a more difficult position because it requires a lease of other media while content marketing is associated with the media owned by you, such as a website or a social media profile, and the rent item is not included in the budget. But that does not mean that content, in both cases, shouldn’t be invested in, so it would be better. Some brands invest a lot in such content, they have their own editorial staff, such as GM, which has its own online magazine and creates their own podcasts, even TV shows,” explained Siniša Waldinger, creative director at Bruketa&Žinić OM.

Lazar Džamić: How I 'buried' Ekrem