Who’s behind the campaign that entire Croatia is buzzing about?

The campaign has caused a real storm on the social networks, and has divided the users into two camps, which actually means it's a success according to the profession 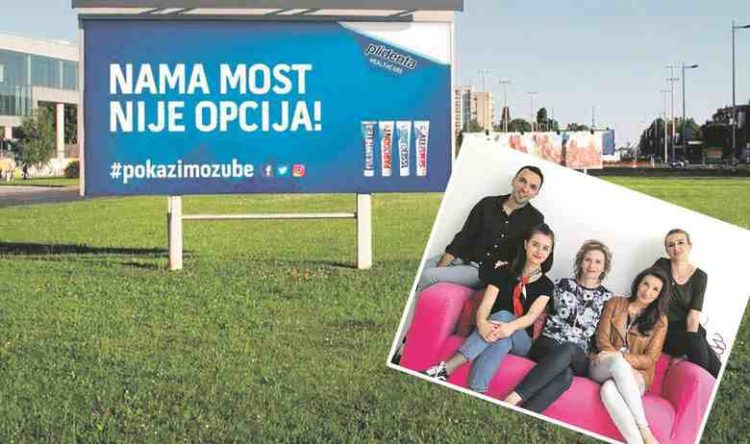 A series of billboards with wordplay copies appeared throughout Croatia, sending ambiguous messages playing on the political terminology and names of the parties and terms from dentistry, something on the line “A bridge is not an option for us” (there’s a party in Croatia called Most which means bridge, and a bridge is also a term in dentistry). The styling of the posters is also made to resemble election posters, below which stands the hashtag #pokazimozube (#showsometeeth).

However, although the wordplay and visual design of the ads might lead some to conclude this is part of an election campaign and a showdown between parties, the blue ads with white copy actually advertise the Plidenta toothpaste. Crowns, bridges and fountains are in fact part of everyday dental vocabulary. This ambiguity of words in the campaign provoked many reactions of passersby and users on social networks.

Behind the somewhat subversive campaign is the agency Ideo Dizajn, which has been active for eighteen years. Although for years they’ve been doing visual identity for Plidenta toothpaste, previous, less provocative advertisements never caused such interest in the general public. Agency is led by Amra Ajamović Perić and Tanja Katić Sviličić, and their associates. According to Amra: “The messages of the campaign are politically neutral, but we are trapped in the political dialogue and cannot see beyond it. That is exactly what we wanted to show – that the initial response will focus on politics, not on oral hygiene, on nice smiles. Our client, Branimir Zoraja, manager of Atlantic Group, bravely accepted our proposal.”

They also set up platforms on social networks, Facebook, Twitter and Instagram, where, they say, there’s no moderation in reactions. Their campaign was graded either with straight 5 stars or with 1. There’s no other grade in between. There were bad reactions as well, so one of the posters that mentions crowns was vandalized during the night (in Croatian, crown also means rosary and the message was “We don’t accept rosaries in our ranks”). “The crown (rosary) in the context of this ad is a dental term. The meaning of certain words depends on our interpretation of them,” explains Andrea Putnik. I asked them whether it was a coincidence that the posters were rolled out in time of local elections. They agree it was not.

Designer Boris Malesevic, the author of many political campaigns, advertisements evaluated positively: “They caught the political moment and this is commendable. The campaign has divided people into two camps, which means it is good. The worst is when a poster assess the Troika, to the political, and advertising. ” Vanja Blumenšajn, our esteemed Creative Director, concludes: “Without prejudice to the assessment of creative solutions, I believe that the purpose of advertising is not only to attract attention, but controlled, consistent communication with a view to long-term construction of the brand. Challengers in the market or brands with small investments in communication can not afford this kind attract attention, which will result in increased attention, but has questioned the long-term effect. With handicraft, kopirajterske hand, has the coolest games words, the audience reacted, it seems to me quite positive, so from that side of the financial investment is justified, and the owners of the brand will odličiti that want to build their image. ”

Designer Boris Malešević, author of many political campaigns, rated the ads positively: “They caught the political moment and this is commendable. The campaign has divided people into two camps, which means it is good. The worst thing is when a poster is rated with a 3. And that goes both for political and for commercial advertising.”

Vanja Blumenšajn, a renowned Croatian Creative Director, concluded: “Without going into the assessment of creative solutions, I believe that the purpose of advertising is not only to attract attention, but a controlled, consistent communication with a view to long-term brand building. Challengers in the market, or brands with small investments in communication, can afford this kind of attention, which will result in increased attention, but has questionable long-term effect. From the craft side of things and copywriting angle, there’s some nice wordplay there. The reaction of the audience was, I would say, quite positive, so from that side the financial investment is justified, but the owners of the brand will decide how they want to build their image.”