Marking their 25th birthday, Imago Advertising Agency said goodbye to the ghosts of the past

Imago Advertising Agency decided not to delve on looking to the past, but to look to the future 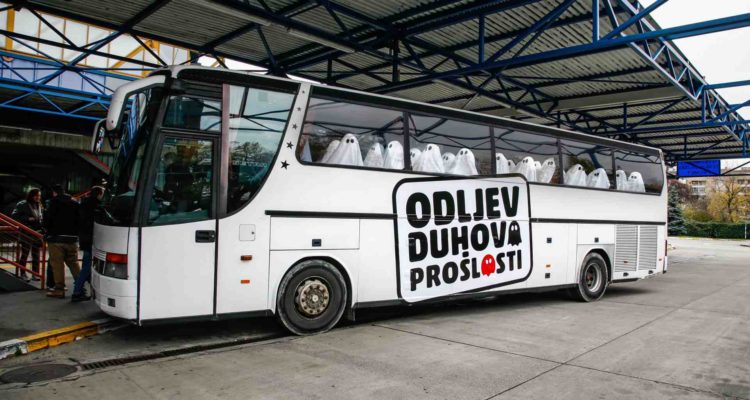 Amid the celebration of their 25th birthday, Imago’s forward-looking creatives recently launched an unusual online campaign, “Drain of the Ghosts of the Past”, calling on citizens to name their ghosts on their website, which were then sent on a bus trip far away from Croatia.

Namely, as creatives use their brains daily in their work, and since brain is their most important tool, brain-drain from Croatia is a huge problem. Given that the goal of the Imago Advertising Agency is to have quality and smart employees who use their brains in the next 25 years as well, they have decided to reduce the number of young and smart people leaving Croatia by at least one bus.

That one bus was filled with ghosts of the past which they believe are some of the biggest causes of the social apathy and emigration of the youth. Thus, from a bus station in Zagreb, instead of a bus full of young people, they sent off a bus full of ghosts of the past like Pavelić, Tuđman, Tito … and others who burden Croatia’s today, and even more Croatia’s future.

Imago Advertising Agency hopes that this symbolic move is the first step towards Croatia in which the people will live in 2017, and not in 1941 or 1991.

Damir Ciglar, CEO of Imago Advertising Agency, explained: “Although Imago’s past is beautiful and full of success and achievements that we are proud of, we are more concerned with contemplating the future. And to make the future successful, we need smart and creative people. Our birthday wish: let’s stop burdening ourselves with the past, and let’s design and create a future that will make smart and ambitious people come to Croatia, and not run away from it!”

Goran Lizdek: I work only on BMW, allowing me to concentrate exclusively on my part of the job and giving me space to give my maximum