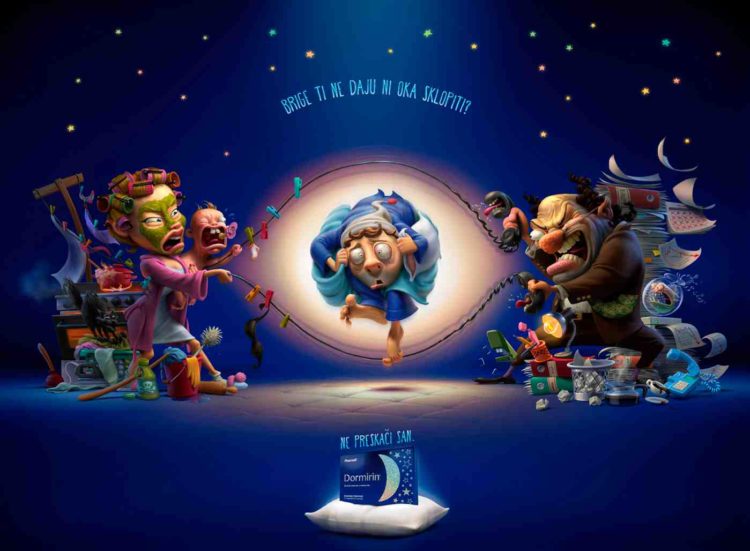 In addition to an interesting idea, which is always the foundation of a good ad, Imago decided to take production to the highest professional level this time by engaging one of the best and most awarded international illustrators, Oscar Ramos (www.behance.net/piensapositivo).

Imago says it was a pleasure to work on this campaign because they had the full support of the client, with the mutual attitude: “Let’s find the best person to make this idea shine to the fullest.”

Darko Bosnar, Art&Innovation Director at Imago, just like the character in the visual, didn’t sleep a moment until he had found a solution, and says that he had been waiting for a long time for a chance to put the name of one particular illustrator on the table, Oscar Ramos. Chilean illustrator Ramos has become a global star among illustrators thanks to his particular style and technique of drawing; he has won all the major awards for his work and has collaborated with the world’s largest agencies.

“It’s a great privilege when you have the opportunity to have your ideas and art direction visualized by an illustrator of the caliber of Oscar Ramos. This level of implementation, due to budget restrictions, is unfortunately not part of our daily lives. But it’s nice that there are people who recognize ideas worth investing in, and who await the results with the same zeal as you. I love this job because of such projects. Also, I like to set myself higher goals than I think I can jump. I guess this is the only way to surpass oneself,” said Bosnar.

Tomislav Maričević from Pharmas pointed out that as Dormirin is a leading product in its category, they wanted a communication campaign that would push the boundaries of the normal and expected in this area, one that would communicate the essence of the product in a memorable way. “Our creative agency Imago fulfilled all expectations with their idea, and the result is an ad that truly stands out from the industry standard.”