Differentiation and love as the key to business success 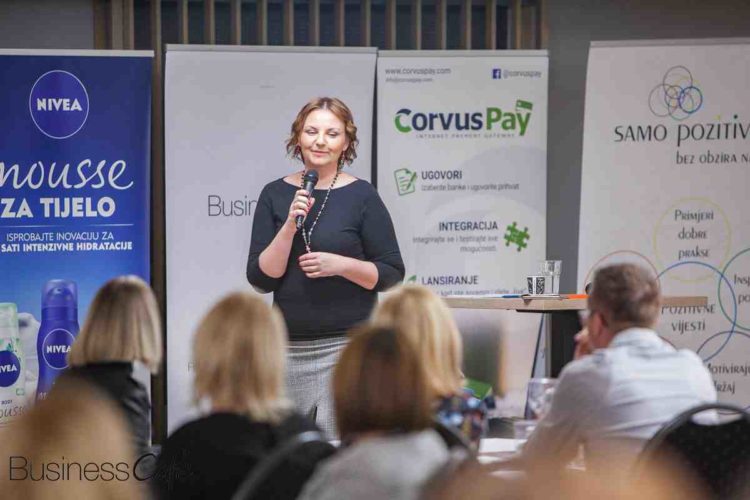 On Thursday, November 29th, the 49th Business Café was held in Zagreb. The theme of the event was Crucial Influence of Marketing on Success. This time, Kristina Ercegović (founder of these entrepreneurial gatherings) had a busy day, because she had 10 guest speakers at the event.

The first guest was Ana Šerić, an artist, entrepreneur and mother of three. Ana is the owner of BITE ART, the founder of the project of edible art. She creates cookies with small art works painted on them. After the cookies are consumed, their packaging becomes a handy picture frame, with information about artists and the project in general. BITE ART is a continuation of Ana Šerić’s artistic activity, and aims to promote domestic art to the general public. In the form of a product, BITE ART functions as an ideal business or diplomatic gift, a souvenir, and can also serve as a decorative item. Her desire is to further develop similar products for hotels as special souvenirs and travel mementos.

Male duo Ivan Voras and Saša Tenodi are the authors of the popular podcast Surove strasti. They believe that differentiation and consistency are important for success. Their podcast hosts people who stand out with their passion for a job, business, a hobby… So far, 75 people have been interviewed, and the common thread for all of them is exactly the passion. Saša also demonstrated on his own example that failure is a part of success.

A renowned lawyer, Viktorija Knežević, who recently launched the portal ocijenime.hr, where public officials can be assessed publicly, also spoke at the event. So far, 21 Croatian cities have been covered, and the idea is to further upgrade and expand the base and cover all counties. She collects money for the project through Indiegogo, and so far they have collected HRK 25,000, of the HRK 75,000 target. Part of the ticket revenue from this event was actually donated to the project.

Elena Cvjetković, a specialist in niche perfumes and an internationally famous blogger, has revealed the secret of her success. She thinks it’s not all in the passion, but also in the love for what you do. Passion comes and passes, but love remains. She also believes that one should focus on the things that are different or new. She personally dealt with marketing, when many didn’t even know what the word means. From there, she went into coaching, and today she makes niche perfumes for which many don’t even know what they are. She believes the best kind of promotion is the word of mouth.

At the very end of the event, Damir Januzović, a web sales and internet marketing expert, explained how to sell products that many would say are impossible to sell. He believes it is important to be authentic. He believes authenticity is the key to sales. He also believes that e-mail marketing is not dead, but that one needs knowledge on how to do it in a quality, smart manner.

The event was held at the Hotel Acadamia at Kaptol, with 200 enthusiastic entrepreneurs in the audience, and Kristina Ercegović took the opportunity to announce the jubilee 50th event, which will be held on January 24, 2019, and will invite guests who have left the best impression with the audience in the last eight years at one of the Business Cafe events held throughout the region. To recall, the event is held in seven countries of the region: Croatia, Bosnia and Herzegovina, Macedonia, Serbia, Montenegro, Austria, Slovenia.

The remaining Business Cafe events by the end of this year are: December 6 in Sarajevo, December 12 in Ljubljana, and December 13 in Skopje.

More about the project at www.businesscafe.info

If only everything was so simple in advertising!