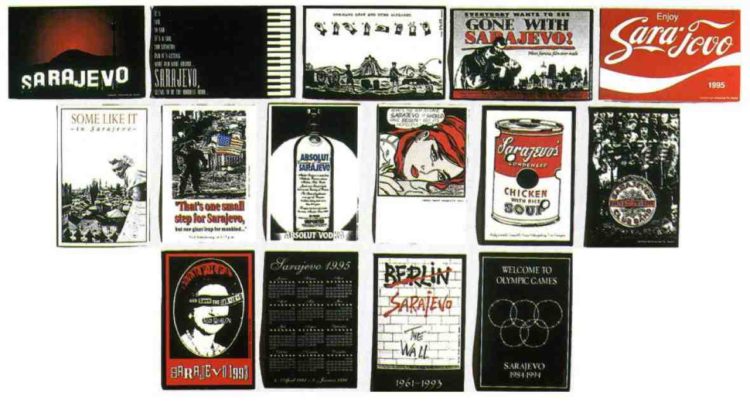 Today at 12:00 hrs. Gallery 11/07/95 will open the exhibition Greetings from Sarajevo 1993. Invitation to the opening which has arrived at the newsroom of Media Marketing looks like a postcard: A stylized Coca-Cola logo, with letters of the sign translated into Sarajevo, and the bright red color of globally perhaps the most important ad in the history of advertising.

In the announcement of this exhibition, on the portal of Radio Sarajevo, Ahmed Burić wrote:

“An invitation to the exhibition landed in my inbox. And then, the torrent: I don’t know exactly when I first saw this postcard made by Design Trio. It was probably in Ljubljana, sometime when the war was coming to an end, and I must say that I would be pretending if I said that I was impressed by them at that time. For us who spent the bulk of the war away from Sarajevo, somehow, it was not fitting to make jokes on that account, although our friends who came to see us almost ridiculed us for it. It’s hard to explain, but it is so: a man, displaced not entirely by his own free will – a refugee to be precise – either wants to fully get away from the suffering he had left, or yearns to identify with it too much. But, it’s pointless to explain this to someone who hasn’t been in such a position.

The still ongoing exodus from Syria, in front of the eyes of the whole world, has taught us that the fates of refugees are hardly in anyone’s mind. They (we) are just numbers, until they become UNICEF Ambassadors. All the rest are just stories for small children. And for great literature.”

COMPETITION FOR EXHIBITION PROGRAMS AT HDD GALLERY FOR SEASON OF 2017

The Croatian Designers Society invites artists and creative teams (designers and those from allied disciplines, critics and curators) to propose exhibitions and projects for the program of HDD GALLERY in 2017. The deadline for proposals is 20 June 2016.

HDD Gallery presents design production and a high level of cultural values, ordered, self-initiated and “personal” original works, but also many projects whose methods of design respond to social phenomena and problems. A particularly important part of the gallery program covers the history of design in Croatia and reactualisation of works by local designers from past decades, and aims to show the design not only in its shape and aesthetic continuity, but also through social and cultural context in which it develops. The program of HDD Gallery is supported by the Foundation Kultura Nova, Croatian Ministry of Culture and the City of Zagreb.

Projects eligible to apply are:

Mr. Scissons will begin his new role in late summer and will be based in New York. He fills the void left after the agency’s former New York Co-CCOs Jonathan Mackler and Dan Kelleher departed in January. He will partner with Global CEO Guy Hayward, who joined the agency in January of 2015 from BETC to help beef up the agency’s global output. KBS global clients currently include TE Connectivity, Keds, Bank of Montreal and BMW.

Former senior strategist and agency partner William John “Bill” Grizack was sentenced to serve 57 to 81 months in state prison for defrauding ad agencies McKinney and The Variable (formerly known as Pave Advertising) with fake contracts from Coca-Cola and Brown-Forman. According to an earlier report in The Winston-Salem Journal, state prosecutor W. Scott Harkey stated that these fictional accounts would have been worth an estimated $269 million.

The agencies hired 40 advertising professionals from around the country to work on the fake business. All of these employees lost their jobs when executives discovered the deceptions pulled off by Grizack, who was employed by both agencies at the time.

But the story of Grizack’s deception involves at least six different agencies that employed Grizack before his crimes caught up with him.

“Right after his scheme was discovered by executives at Pave and McKinney,” Harkey said, “he went to [Colorado’s Egg Strategy] and did the exact same thing” by falsifying a $14 million contract with McDonald’s.

Harkey claimed that Grizack’s deceptions led to $4 million in combined losses for The Variable and McKinney.

YouTube wants to turn video ads on its platform into a DIY possibility for small- and medium-sized businesses.

Google is launching three ways for SMBs to create video ads for YouTube that are—at least for the most part—free. With a new app called YouTube Director, the video juggernaut is helping businesses with little or no marketing budget create commercials on their own. The app includes a number of templates, music and editing tools and is free to use.

One small business that has used the app is The Barber Shop Club in Los Angeles, which used it to shoot and edit a spot to coincide with an AdWords campaign. According to Google, the business saw a 73 percent increase in ad recall and a 56 percent lift in brand awareness.

Here’s the video ad The Barber Shop Club’s created with the video app:

Google has changed the color of its ad tag icon from yellow to green.

Perhaps that might seem like a minor change until you factor in that marketers spent $20.5 billion in search advertising in 2015, an 8% increase from the previous year, according to the IAB. Even a small increase in clickthrough rates would translate into millions for Google.

Still, a spokesman told Ad Age the color change showed “absolutely no difference” in clickthrough rates after testing it on 5% of its user base back in April. Though that could change for better or worse as the color swap is launched worldwide.

“We regularly test ways to improve the look and feel of our search results page,” Google said in a statement. “We’ve been experimenting with a green search ad label and have decided to roll it out based on positive feedback from users and advertisers.”

In January, Microsoft Bing changed the color of its logo from yellow to green because it was easier to see on smaller devices like mobile.

Ad of the Day: Ewan McGregor Waxes Poetic on Human Achievement for Cisco