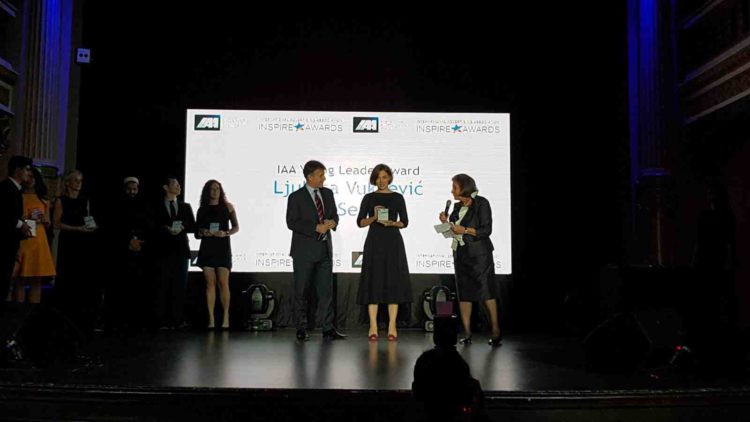 At the gala award ceremony of the IAA Inspire Award – Young Leader held in Bucharest, this prestigious award was given to Ljubica Vukčević from Direct Media System. Recognition is awarded to individuals who contributed to the work of the International Advertising Association (IAA)

As stated in the justification of recognition, Ljubica has significantly improved the work of the Section of Young Professionals in Serbia and IAA by her work. Ljubica is in the YP Section since it was established, and is very successful in her job at the position of Insight Analyst in the Direct Media agency. In this competition, according to the procedure, she was nominated by her colleagues from Young Professionals, and the award was given by the IAA Global Jury.

Evidence that young professionals in Serbia achieve remarkable results within the IAA Worldwide is that this award is given to someone from Serbia for the second time. Two years ago, IAA Inspire Award was awarded to Đorđe Janković, also a member of IAA YP. A section of young professionals works within IAA Serbia and brings together young people who have up to five years of work experience in the profession, or those who are at the last year of communication studies.

Editorial board of Media Marketing wants to congratulate Ljubica for this recognition. We’re also glad that we have hinted something like this two years ago, when we included Ljubica in our The Young Leaders for Tomorrow project.

UK RECORDS HIGHER INVESTMENTS IN VIDEO ADVERTISING THAN IN BANNERS

Mobile advertising in the UK accounts for about 43 percent of total digital advertising. More importantly, advertisers for the first time invest more funds into video advertising than IN banners (adverts).

Research titled Digital Adspend was conducted by IAB UK. In the first half of 2017, advertisers invested 784 million euros in video advertising, which is 46 percent more than in the same period last year. On the other hand, ad spend on banners grew by only two percent, reaching 685 million pounds. Video is, therefore, the fastest growing advertising format and represents 35 percent of all investment in display advertising.

The investment share for video ads, appearing anywhere on the page (most often between text passages), doubled to 407 million euros. This means that video ads are the most popular format today.

The entire report is available here.

After launching a review this summer, Amazon is consolidating its global media planning and buying duties with the IPG Mediabrands network, according to three people close to the matter. An internal memo went out to staff this afternoon. The winning team will promote Amazon’s ecommerce hub, assorted tech products and Prime subscription service around the world.

The review’s final round saw a Publicis Media conglomerate face off against a “holistic solution” group consisting of teams drawn from multiple IPG agencies including Initiative.

According to the latest numbers from Kantar Media, Amazon spent more than $950 million on measured media in the U.S. in 2016, a number that has nearly doubled over the past four years. Multiple analysts estimate the company’s annual global budget easily exceeds $1 billion.

Uber has launched a review seeking its first global creative agency partner and has started talks with media agencies for an unspecified assignment, according to sources who spoke with Adweek on background.

The ride-hailing giant is reportedly looking for a single agency to handle its brand campaigns around the world.

According to one source, the review will not affect Uber’s relationship with U.S. creative agency partner Deutsch, which won project-based work last summer but does not maintain a presence outside the U.S. A Deutsch spokesperson declined to comment on the news today.

According to a person with knowledge of the matter, Ark Advisors will be managing the process in which Amgen seeks a single media agency to handle planning and buying duties for all of its brands in the U.S.

MEC has handled the consumer side of the business since 2003, when Amgen concluded its last review, and Omnicom’s SSCG Media promotes the company’s products to healthcare professionals.