In the times when crime chronicles and tabloid topics take up nearly all media space, this magazine aims to inspire and raise hope

Editorial board of the Talas magazine launched a crowdfunding campaign on Friday, February 2, named #PlivajUzvodno (#SwimUpstream), and after three days of campaigning they managed to raise over 60% of the required amount. The campaign’s aim is to raise 3000 BAM (€1500) to cover the annual press costs, but also to increase the visibility of this magazine.

“In the times when crime chronicles and tabloid topics take up nearly all media space, we have decided to launch a magazine that aims to inspire and raise hope, and to show that there are positive stories that deserve to be heard! Talas writes about the people you regularly see in your city, but you don’t even know how great things some of them do. We want to present the public with successful stories from entrepreneurs from this area, musicians who produce great music in miniature studios, and athletes who achieve remarkable results with minimal support from their surroundings,” Talas editor Boris Maksimović told Media Marketing.

After five magazines issued, they realized that already at the beginning of the year they provided most of the money needed for printing, but were not satisfied with the visibility of the magazine. With this in mind, they launched the crowdfunding campaign on Indiegogo platform to gather additional resources, increase the number of subscribers, but at the same time raise the visibility of this magazine, which they say is unique in our region.

“Since we realized that among our readers we have a lot of people who are much more famous and influential than us, we decided to ask them for help and they all agreed. So we introduced the role of Talas Ambassadors. Every day of our campaign, a video from one of our ambassadors is posted on our Facebook and YouTube pages. We asked them to stand in front of the camera and say honestly why they like Talas, and why others should consider buying or subscribing to it. No script. Just honest and genuine comments, and I believe it’s obvious,” Boris says.

Talas ambassadors featured so far are Dijana Tepšić, Hana Kazazović alias Cyber Bosanka, Nikola Pejaković, Đurica Štula, Vanja Mišić and Novak Čičković, and in the following days we can expect more people from public life, entrepreneurship or creative industries who have decided to support Talas. The campaign will run until 23 February, by when they expect to collect the rest of the required amount.

“Nebojša Krivokuća, our associate and creative director of Communis DDB from Belgrade, is credited with the name of the campaign that should reflect what Talas believes in, namely swimming against the stream, with disregard of imposed patterns, resilience and hard work. When people see Talas for the first time, they say – but this is not a magazine, this is a book! It has an average of 140 pages, it is printed in color and on high quality paper, and all this in delightful design. A lot of effort and love has been invested into every page of this magazine. In addition to the inspirational and exhaustive interviews with people who are trying to improve the world around us, Talas offers plenty of content from all areas of culture and art. We tried to make a magazine that does not lose its status over the years, which is kept on the shelf or is being handed down to dear people when you read it back to back,” Boris added. 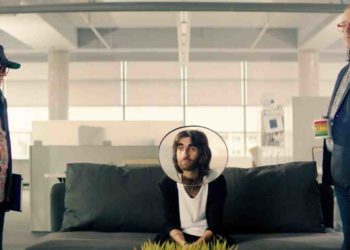 VIDEO: Fake ads no longer a problem for advertising festivals