Another year in a row Bol got a fresh dose of color, and the brightest pictures in six years of the Graffiti na Gradele festival 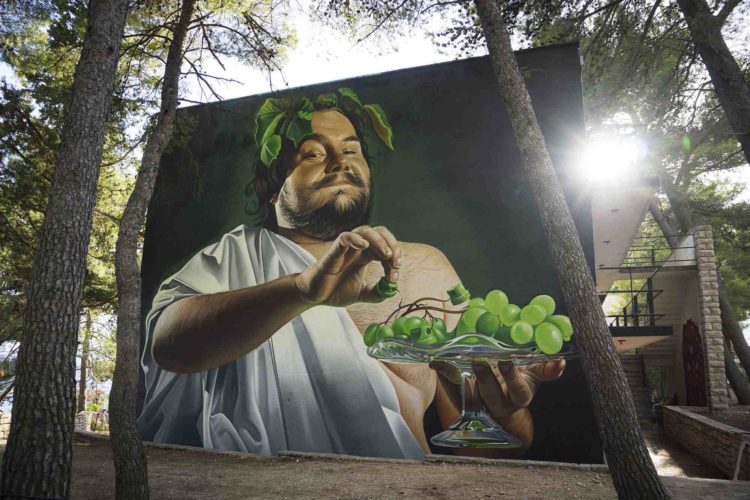 Brač, an island known for its natural beauty, a beach that changes its direction depending on the direction and strength of the wind, and the white stone, now received its fourth attraction for tourists. Bol’s facades have become a canvas on which every year street art and graffiti artists show what they can do with sprays and colors, leaving the people of Bol and all island visitors a whole new vista that must be seen.

Another year in a row Bol got a fresh dose of color, and the brightest pictures in six years of the Graffiti na Gradele festival. Beginning as a small project of enthusiasts, it has slowly grown as regional artists started coming, and now it has reached an international level. This year, along with many regional artists, Bol was visited by Spaniards Sebas Velasco and Inigo Sesma (Yugoslav Riviera), artist JACE from the Reunion Island in the Indian Ocean and local artist Lunar (NYC Train Cars), and the central wall, the one you first see on the White House, this year is adorned with Dionysus, a new fantastic work by Lonac. Great works were also painted by local artists Chez 186 and Sarme (Cheers mate!) as well as Royal, Wuper and Casino (Wild Figs).

In their work, as well as the works of 20 more graffiti and street art artists, in a relaxed atmosphere of a pine forest and a beautiful beach at the foot of the festival site, more than two thousand people enjoyed for three days and nights. Along with the ever-growing music program that for the first time this year brought Edo Maajka, the whole Triestri band (Kuka$, High5, Buntai), Krešo Bengalka, Tone Tuoro, Marchello, Vrh and Oreb, Bor Balboa and many other performers and DJs. For them, Graffiti na Gradele has become a festival that you plan to come to, and even if you are only passing by, next year you will certainly plan your trip.

Take a look at the rich photogallery and see why Graffiti na Gradele is a festival you simply have to see, and why it was named the best boutique festival in 2016 in Croatia and was included in the top 10 street art festivals in the world for the summer of 2017.

Culture of finest luxury: 24 Hours of Elegance 2017 by CHIVAS in Belgrade